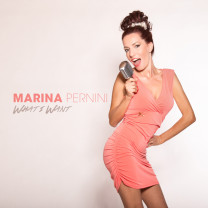 The song can be streamed at this location and is available for radio airplay upon request:
https://soundcloud.com/epictronic/marina-pernini-what-i-want

Marina stated: “I am finally about to release my new single “What I Want” via Epictronic worldwide. I have, once again, decided to work with Marco Chiereghin who is songwriter and producer for my song, for whom I have performed and written the lyrics. This song is about myself and what I want for me, since the lyrics were inspired by people’s constant research for happiness , elsewhere , far from the simple things we deal with on a daily base like love and building on a happy and free soul. “What I Want” is a single release but,  we are really working on a full length album that will be released via Epictronic when ready. Its very hard to describe what I am living with simple words … Having signed this deal is like a dream come true. My own dream coming true. I truly belive that this is a gift from life after a life long commitment and devotion towards music.”

New versions of the single will be released during the coming months.