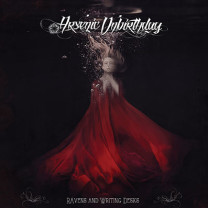 Arsenic Unbirthday is a poisonous alternative rock band. Formed some years ago by guitarist Nick Farlight and vocalist Mary Red Mallow, they through several lineup changes and names until the actual ones. With the benefit of countless experiences abroad with some world-renowned artists, and many side projects, after recording a promo in the well-known Death Island Studios in Denmark, they found home at Epictronic / Wormhole Death for worldwide release of their first official EP. Be careful, before ingesting read advise on the label.